With several awards and accomplishments under its belt, Hacienda Tres Ríos Resort, Spa & Nature Park is proudly celebrating its 2nd operational year and preparing for the upcoming year.

During its first operational year, the resort became a role model for sustainable tourism in Mexico and the Caribbean. The resort placed itself as one of the top preferences of tour operators in Europe and the United States, while still captivating the affluent Mexican tourism, who selected Hacienda Tres Ríos as their choice for weddings and honeymoons as well as their preferred vacation spot.

Following the precedence of 2009, Hacienda Tres Ríos hosted several important celebrities such us the royal Denmark family, several Mexican actors with Fundacion Televisa. The Riviera Maya resort was also honored to receive President Felipe Calderon for the official inauguration of this eco-friendly resort. Recognized as a national role model for sustainable tourism by the Mexican government, Hacienda Tres Ríos hosted several events to commemorate its commitment to the environment such as: 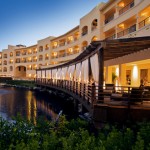 The Resort also maintained itself with technological advances by launching its mobile website and an innovative mobile booking engine powered by Sabre Hospitality Solutions. In keeping with these trends, Tres Ríos also hosted its first Twitter/Blogger familiarity trip in August that included 9 invited prominent bloggers in the Twitter community. The resort was also recognized as a leader in utilizing social media tools in Mexico to promote itself and the destination. Hacienda Tres Ríos is looking forward to an even greater 2011 by continuing to expand its outstanding environmental practices, first-class services, and the opening of its new modern facilities.